25 Feb 2019
When Shinde had complained of chest pain three years ago, his family opted for medical management instead of surgery owing to his age. However, when he hit 92, things began to get difficult once again. Not only did his chest pain worsen by the day, his appetite started failing him. In fact, restricted mobility made him feel like he was a burden on his family. He could hardly finish a sentence without getting breathless. On an unsuspecting day, the inevitable happened and he suffered from a near-fatal heart attack.

A surgery of this kind is fairly routine for the busy department of Ruby Hall. The question was, at 92, could a patient be subjected to such a high-risk procedure. Dr Shirish Hiremath (MS), director, Cath Lab, Ruby Hall Clinic, explained, “Shinde was coping with angina (heart pain) for over three years. Since the time he was 89, his condition was managed medically with non-invasive testing. He fitted in the class of chronic stable angina and was responding well to the medication in general. 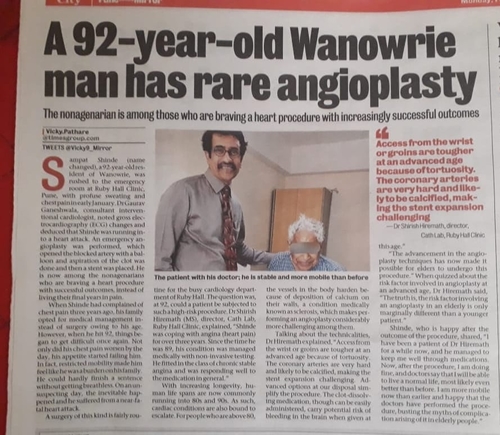